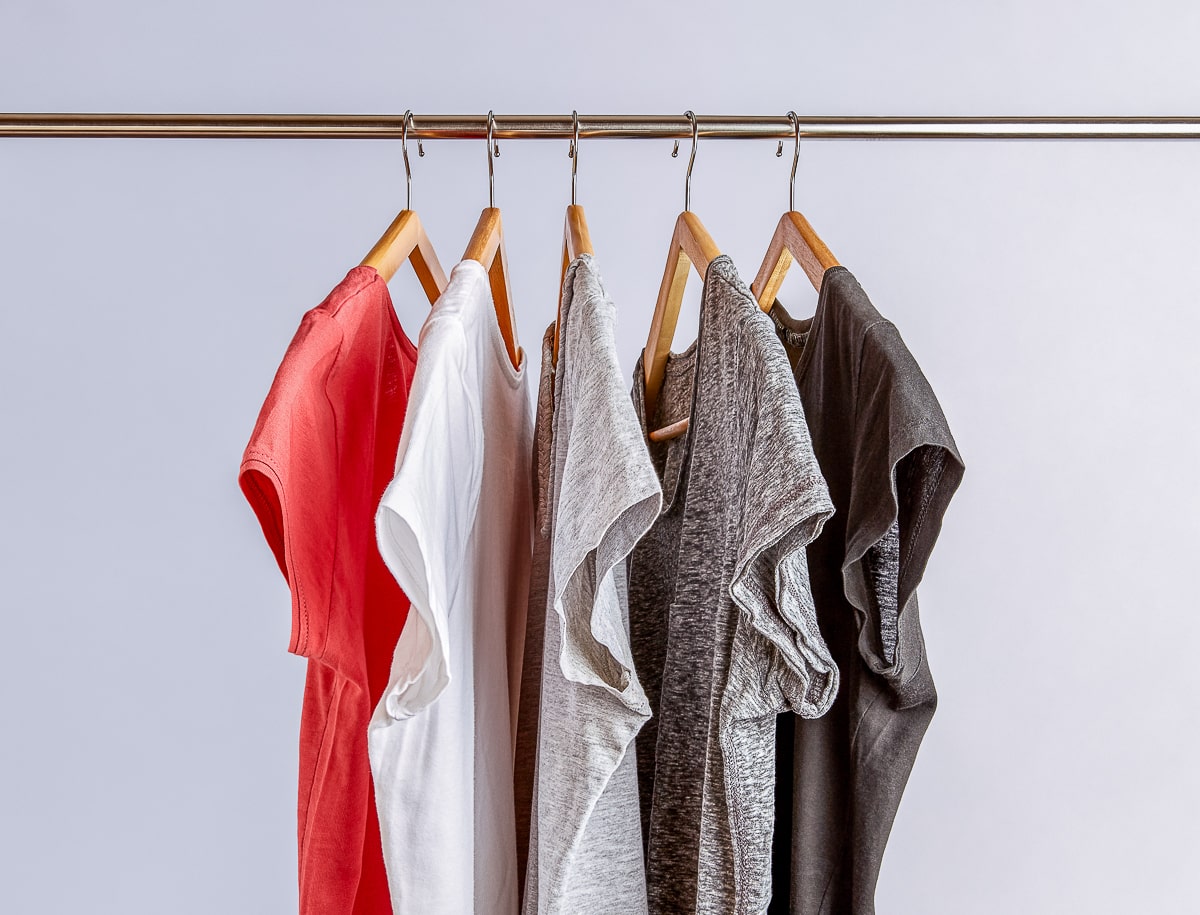 No New Clothes For A Year – Here’s What We’ve Learned!

We wanted to (and are still in the process of) downsizing our wardrobe since we move and travel quite frequently. So not buying any new clothing items just made sense for us. We are also more and more aware of the environmental impact of consuming more (clothing items), so that’s a reason, too.

Before we give away all the details, let’s dive into the other things we have learned by not buying new clothes for basically a year. Perhaps it’s something you have been wanting to do, too!

We Have More Than Enough Clothes Already

One of the main findings from our “experiment” was that we have more than enough clothes already. Yes, that blue shirt in the store might be really nice but upon closer it was actually not that different compared to one of the tops Lisa already had in her closet.

After a few months, we became more and more certain that we just didn’t need new clothes for our wardrobe since there were so many (great) pieces in it already. And to be honest, we didn’t really wear all the clothes we had anyway – so there was really no need to add any more.

Read Next – How To Get Your Clutter Under Control

People Don’t Notice If You Wear The Same Thing

This one came as a bit of a surprise to us, but people don’t seem to notice if you wear the same shirt or pants multiple times a week. To be honest, we often times also don’t remember what other people wore just a couple days prior – so it makes sense.

We usually still try to avoid wearing the same exact outfit two days in a row. By just switching up our top or bottoms, however, an outfit can already look quite different.

In essence, we have been creating somewhat of a “capsule wardrobe”. Similarly to this challenge, it wasn’t really planned – it just kind of happened. So if you wanted to try something similar, starting with the creation of a capsule wardrobe might be a good idea.

Getting Over Mindless Consumption Can Be Difficult

Even though we knew that we didn’t want nor need new clothing items or shoes, not actually buying anything new was a bit tougher than we expected it to be.

“In the moment” consumption was the hardest one for us to resist. You know, when you are in a store and find a shirt that looks sooo nice. You know that you don’t need it but you really want it because at that moment you think it’s the perfect clothing item.

We made an agreement that we wouldn’t buy any clothing items in cases like these – unless we really needed it, which we didn’t over the course of the year. Instead, we would take a photo of the item and maybe even try it on.

Looking at the photos even a couple hours later, the clothing item suddenly didn’t look as perfect anymore. Most of the time, we just forgot about it and never regretted not buying it. In a few other cases, we actually found that we had similar pieces in our wardrobe already and so there really wasn’t any justification for buying it.

Read Next – Healthy Habits That Will Positively Affect Your Life

Having Lots Of Basic Items Allows For More Outfit Combinations

This point is once again related to the point we mentioned above that we essentially created a capsule wardrobe that works quite well for us. Instead of having lots of colorful clothing items with crazy prints that clash with other pieces, we have a lot of shirts and pants in basic colors such as grey, navy, white, and black.

Of course, we also have some other colors or prints in our wardrobe but they are either uni-colored or have a timeless print in more subtle colors. This way it is super easy to mix and match tops and bottoms.

Even though we haven’t bought any new clothing pieces for a year, there were still lots of new outfit combinations to try. Maybe Lisa will write a whole post about her “kind-of capsule wardrobe” and which clothing pieces are absolute must-haves in her wardrobe.

We Always Gravitate Towards The Same Clothing Items

This finding of our experiment was actually not as surprising as it should have been. Even though we didn’t buy new clothes – and actually downsized our wardrobes a bit – we most of the time gravitated towards the same clothing items week after week.

For Lisa, this meant the same two pairs of jeans and the same 4 or 5 shirts even though she had quite a few more clothes that she could have worn instead. Does that mean that her wardrobe is still too big? Probably.

We’ll be working on it this year and keep you updated of any changes that we make. Our goal is to eventually only have clothing items that we love and wear regularly (minus occasional wear, etc.).

Read Next – How To Store Your Clothes Without A Closet

Shopping Should Not Be A T

We have found that it is easier to not buy anything when we don’t look at shopping as a . This makes sense. When being surrounded by stores full of clothes the temptation of buying something – even though we don’t need it – is just so much higher than if we never went to the mall or pedestrian area in the first place.

Even though we never really went shopping as a hobby that much before, now we make even more of an effort to find other past times, such as going hiking, writing/blogging, or other things that don’t involve consumption.

We Don’t Need To Reward Ourselves With “Stuff”

Another thing we have learned is that we don’t need to reward ourselves with stuff when we feel like we earned a treat. This doesn’t only relate to clothes but to things in general.

Of course, sometimes it is nice to treat yourself to something. But whereas this might have been a consumer product in the past, we might now take a break from work, go on a day trip, or cook one of our favorite dinners.

We’re not aiming to completely avoid spending money – we just want to avoid unnecessary consumption. This brings us to the verdict of our experiment…

The Verdict: Our Consumer Mindset Has Changed

After a year of not buying any new clothes and also being more of other purchases we made, we can say that our overall consumer mindset has changed.

While we might not be full on minimalists, we are adapting a little bit of that mindset and try to only buy products and services when we know that they are necessary and that they will make us super happy (because they will get used/enjoyed).

Overall, we are a lot happier now since there is less stuff that clutters up our home and we can even store our clothes without an actual closet.

If you are thinking about giving a “no new clothes” challenges a try – even if it is only for 3 or 6 months – we would definitely recommend it! It can really open your eyes about how many unnecessary purchases you might have made in the past and can help you change your consumer mindset going forward!